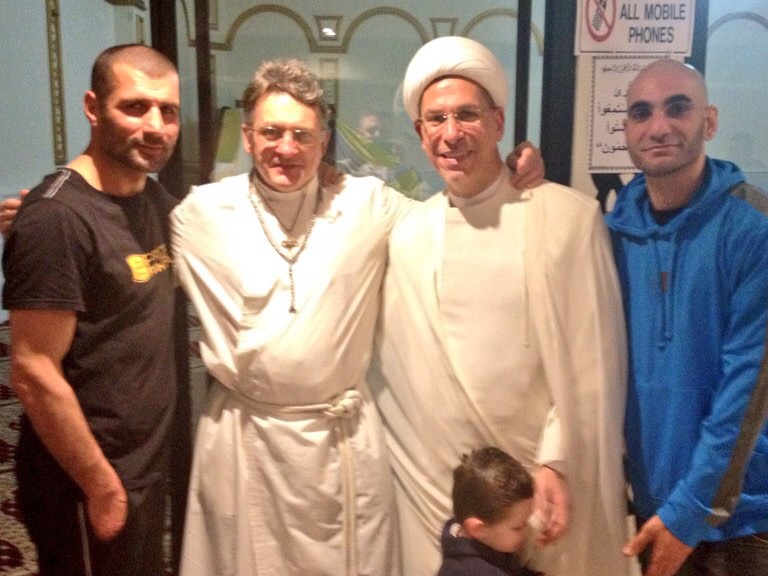 Christianity and Islam are not at war
by Father Dave

Christianity and Islam are not at war – they never have been and they never will be!

I don’t mean anything particularly profound by this. I merely mean to state the obvious.  Christianity and Islam are not at war and cannot go to war with each other because they are systems of belief, and systems of belief can’t wage war any more than they can wrestle or play cards!

Christian and Muslim people go to war, and may go to war with each other, just as they may do any number of more creative things together, such as share meals or play cards, but the bodies of doctrine to which these people subscribe don’t do anything apart from sit still and look authoritative!

There is, as I say, nothing profound about this observation and yet I believe it is the vital starting point in untangling religious conflicts. Our religions are not at war with each other, and neither is there any battle taking place between our gods such that we need to rush to the field in support, lest our god be somehow crushed by the opposition! That type of scenario might have made sense in the theology of the Vikings but it has no place in the 21st century, especially amongst monotheists!

This is my first point – that religions do not go to war. My second point is equally simple – that the Bible and the Qur’an are not at war with each other.

By this I mean to again state the obvious – that books do not fight with each other – but I also want to say more than this. I want to also say that it’s never ‘what the Bible says’ or ‘what the Qur’an says’ that is the problem. It’s what believers think their Scriptures say that is the issue. Nobody ever went to war simply on the basis of what their Scripture said. It’s always a matter of interpretation. It’s what you think your Scripture says that is important.

I’m not suggesting for a moment that there is no connection between what is written in the Scripture and how it is interpreted. I’m not even suggesting that the Qur’an isn’t a more fertile source of martial inspiration than the New Testament. Even so, the variety of denominations and sects within both Christianity and Islam are testimony to the fact that both the Bible and the Qur’an can be interpreted in a variety of ways, and indeed, there are preachers of violence and non-violence within both religions!

“Happy is the one who seizes your infants and dashes them against the rocks.” says the Psalmist (Psalm 137) in one of any number of Old Testament verses that could be used to incite a holy war! And those who think that such jihadist catch-cries are limited to the Jewish Bible forget how the words of Christ used in the parable of the great feast – “force them to come in” (Luke 14:23) – were used by the Crusaders to justify forcing Christian conversion on Muslim peoples they conquered.

Of course I don’t believe that the words of Christ in the parable were meant to encourage forced conversion any more than I believe Psalm 137 justifies violence against children. If you want to know how I and the vast majority of Christians interpret these passages you only need to ask us. Likewise though, if we want to know how Muslims deal with passages in the Qur’an that sound inflammatory to us then we need to ask them how they interpret these passages, and surely we should ask them before jumping to conclusions.

This seems obvious to me, which is why I find it hard to understand why so many Christian people who in every other respect seem to be quite sensible people continue to quote isolated verses from the Qur’an to warn us as to ‘what Muslims really believe’ without ever consulting a Muslim in the process!

Why would anyone do this? It only makes sense if there’s an initial assumption that the Muslim community is quietly plotting against everyone else on the religious spectrum while deliberately concealing their intentions. Many people do actually believe this. Their phobia started with the 9/11 attacks in New York and it has been consistently drip-fed ever since by a media narrative that interprets every act of violence perpetrated by a Muslim as an insane act, inspired by their hateful religion!

Of course the circle of ignorance and fear is a self-affirming, self-perpetuating circle. When we are ignorant of what a group believes we become suspicious and fearful as to what they are up to. Because we are fearful we isolate ourselves from the group and listen to rumours which justify the isolation and increase the ignorance and fear, and so the cycle of isolation, suspicion, ignorance and fear deepens and perpetuates itself. There is, of course, a very straightforward path out of this circle. We sit down and talk with each other, and preferably over a nice meal.

When the September 2001 event occurred I knew zero Muslim people and knew almost nothing about Islam. Along with a vast number of Australians, the twin towers attack left me deeply suspicious of both the religion and its adherents. No doubt I should have tried to dig a little deeper into the matter before allowing my prejudices to settle. Even so, I had a full plate and other priorities. Then, six months later, a local Islamic centre made a large group booking at the bush retreat that I manage. They were organising an Islamic youth camp on my property! I was deeply concerned!

What were these Muslims going to get up to in the bush? Would they be learning to make bombs? I decided that if this camp were to go ahead I needed to be there in person and keep a close eye on exactly what was happening.

Of course the Islamic youth group turned out to be the most respectful group we’ve ever had at our bush camp and their teacher, Sheikh Mansour Leghaei, went on to become my dearest friend. That weekend was the beginning of a whole new learning curve for me that has led me on great adventures around the world and introduced me to so many wonderful people! In the process, of course, I left behind any suspicion and fear I had towards my Islamic sisters and brothers. On the contrary, I found in the Muslim community people who model for me what a Christian life should look like better than any Christians I know!

None of this is to deny, of course, the major tensions and conflicts that exist between Christian and Muslim communities around the world. This is a serious issue. Indeed, I believe it is the most serious issue of our generation. Even so, we cannot properly address these conflicts until we understand the underlying issues, and we cannot understand these tensions and difficulties until there is open and honest dialogue.

Let me conclude by returning to my two points – that our religions are not at war and that our holy books are not at war. These two points are, of course, really the same point. The point is that what we have today in the burgeoning worldwide conflict between Christians and Muslims is a people problem. It’s not a religion problem and it’s not a Scripture problem. It’s a people problem, and at the heart of this people problem is people who aren’t talking to each other!

If Christians and Muslims were talking to one another then no one would be making money in the Christian community by writing inflammatory books like ‘An Idiots Guide to the Koran’ – aimed at warning Christians about what Muslims really believe – because Christians would already know what Muslims believe because their Muslim friends would have told them!

If Christians and Muslims were talking we would not be fighting, and the truth is that the war-mongers can only keep us fighting by stopping us from talking!

I appreciate that the worldwide tensions between the monotheistic religious communities are complex and will not be solved overnight. Even so, the first steps towards the solution are simple and straightforward and within easy reach of us all!

There is a saying in Arabic that translates roughly as “how can you be my enemy if we have broken bread together?”  So start the revolution today! Break bread with your Muslim neighbour! Begin to build a better world and enjoy some nice halal food while you’re at it!

4 thoughts on “Christianity and Islam are not at war”

This site uses Akismet to reduce spam. Learn how your comment data is processed.